“They slipped briskly into an intimacy from which they never recovered.” 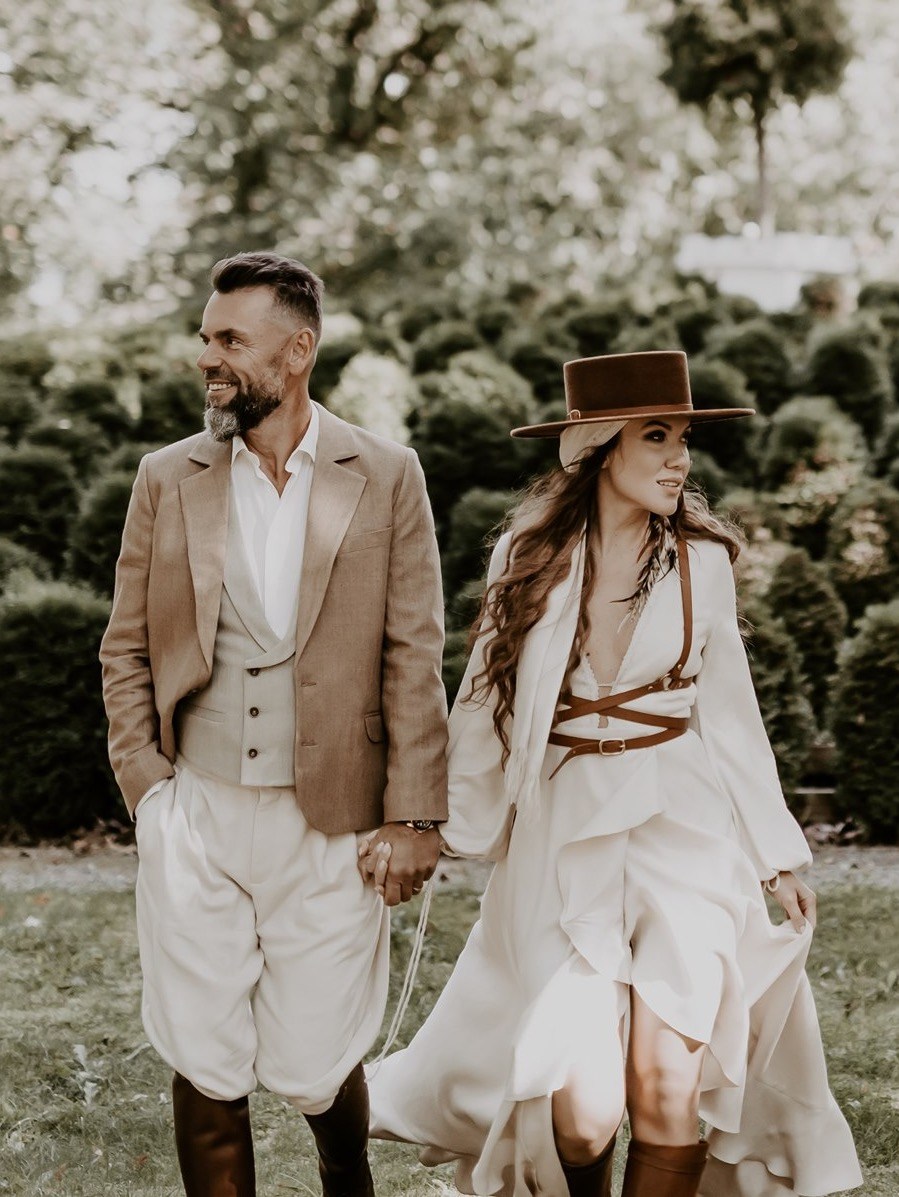 One of our favorite projects in the last few years has been the creation of custom wedding attire for Mr. Jaan Koppel and his beautiful wife, Mrs. Eva Koppel. It all happened already in 2020 but as in the beginning everything had to be top secret – as always – and later, it took quite some time before the pictures got ready to be shared with the public, we let this story become completely ripe before sharing it with you.

It all started right after the pandemic hit the world for the first time in spring 2020. And suddenly, we received the most unexpected call from Eva (then Vaino) who briefly knew Joan for more than 15 years – “Hi, we’re getting married and I’d like YOU to design one of my wedding gowns.” As they were currently in lockdown in their home in Spain and us in Tallinn, we started sharing ideas via zoom meetings before they could finally land on the soil of their ancestors. And then – it became clear the groom wanted to be dressed in GUILD as well. But let’s start with the bride.

Creating her look we kept in mind the two worlds of hers – masculine Spain, full of sunshine, and the feminine North with its forests and moonlight… Estland, her motherland. The robe was crafted of the finest raw silk the world has to offer. The fabric was so heavy it almost resembled linen which makes it even more “vikingish” and yet – it did not wrinkle as linen does. 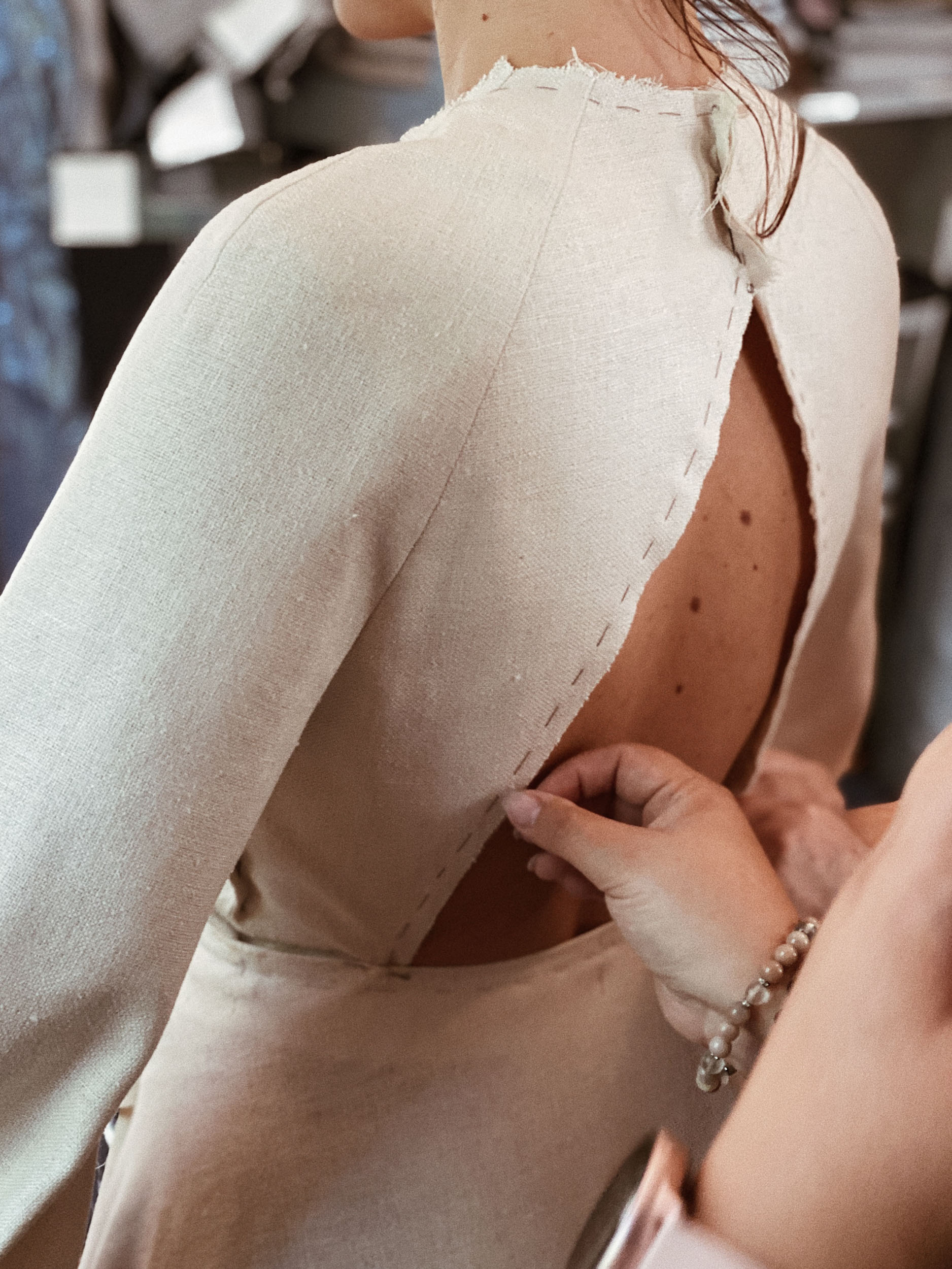 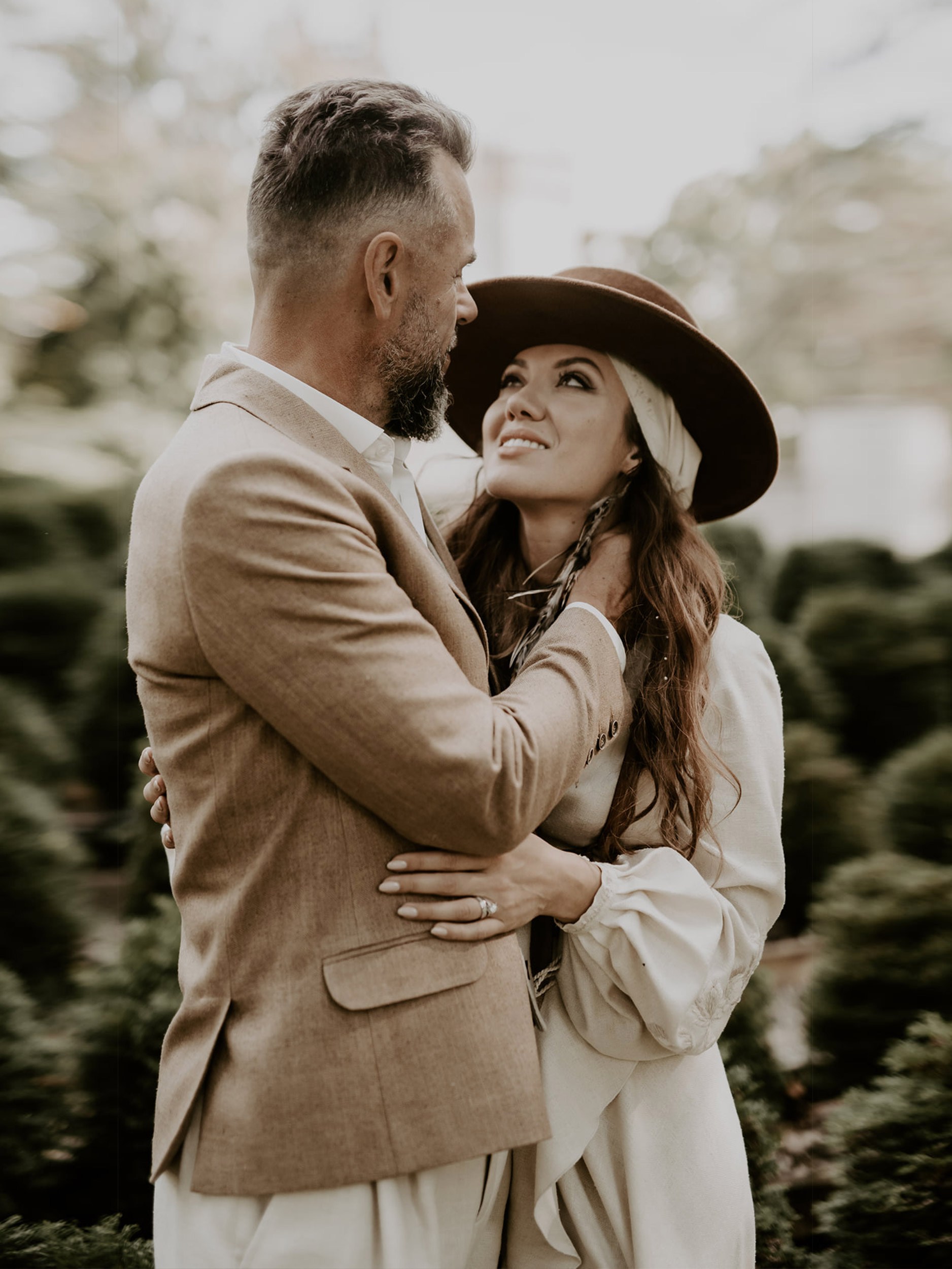 The graceful motives on the sleeves were inspired by the native roots of the bride – different leaves and plants reflecting the indigenous patterns of her Northern ancestors. Growing on the silk into fertile, unique symbols, they were drawn by our head designer Joan Hint together with the bride and were then hand-embroidered by the bride’s grandmother. Little embroideries and also crochet was added to decorate the hems of the sleeves, the back, the chest, and also, the silk scarf with handmade tassels. 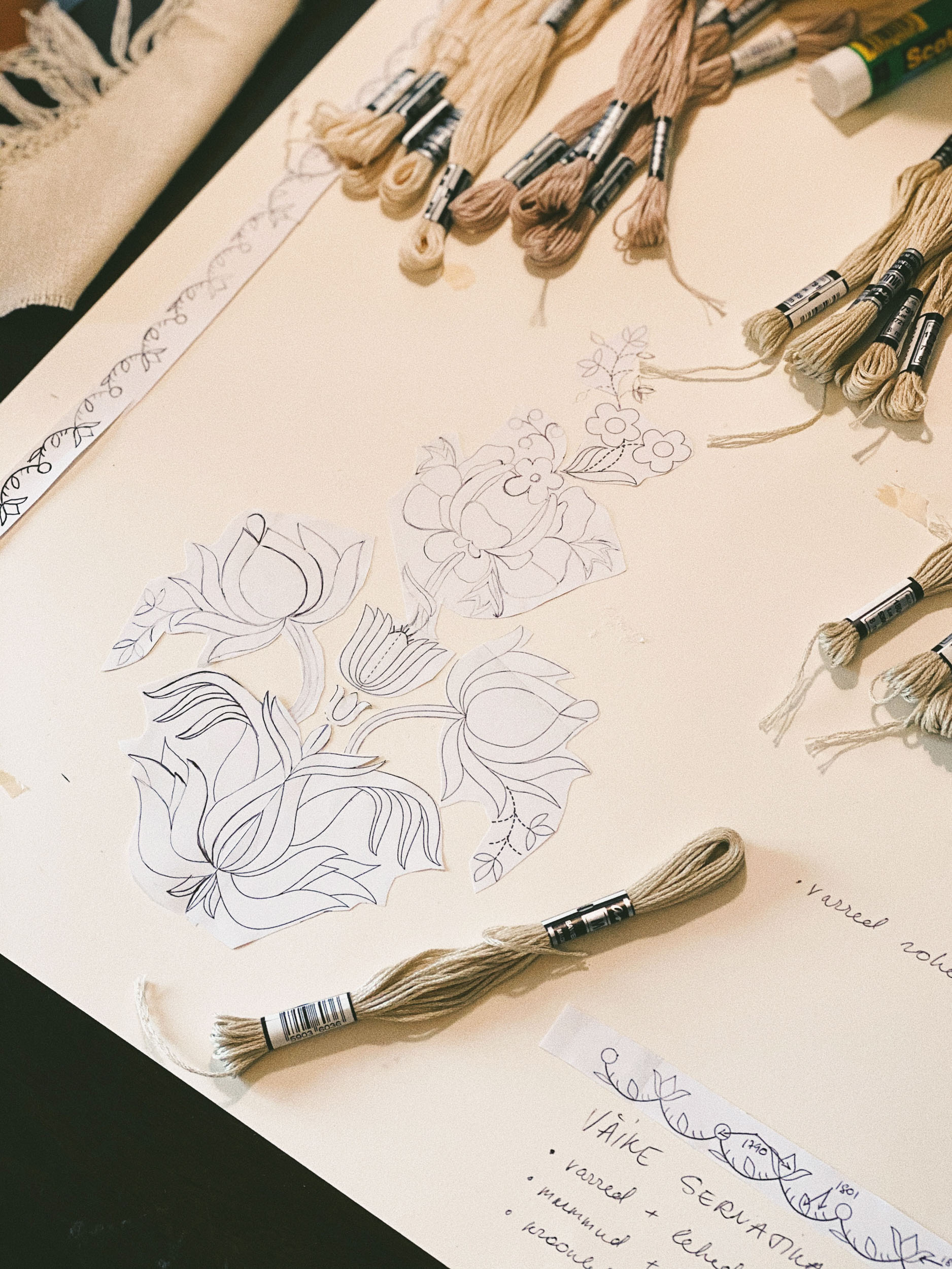 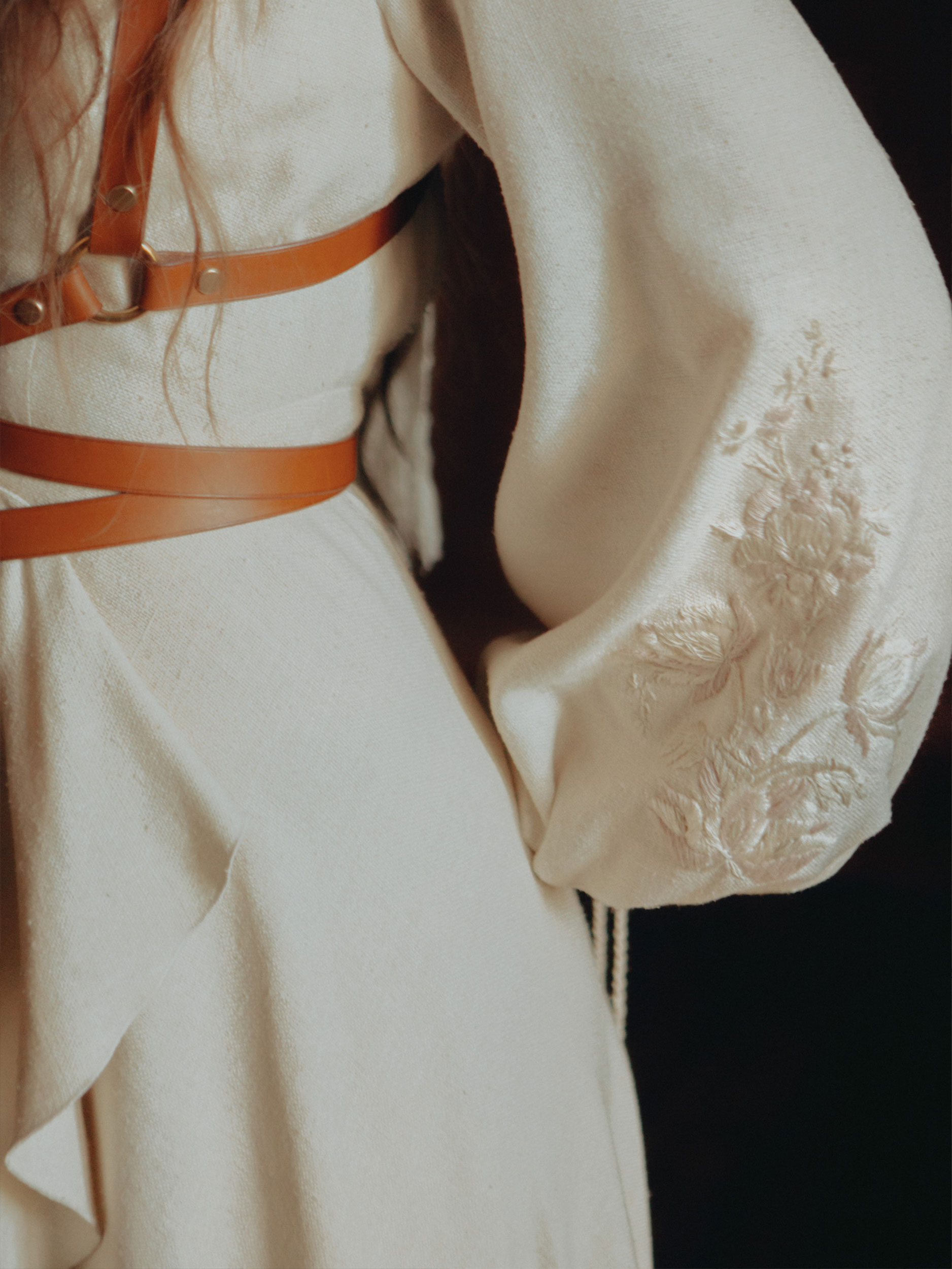 The dress was then adorned with a custom-made cognac-colored leather harness, and our beautiful Spaniard hat lined with chameleon silk and decorated with golden pheasant feather and precious gems of tiger’s eye. 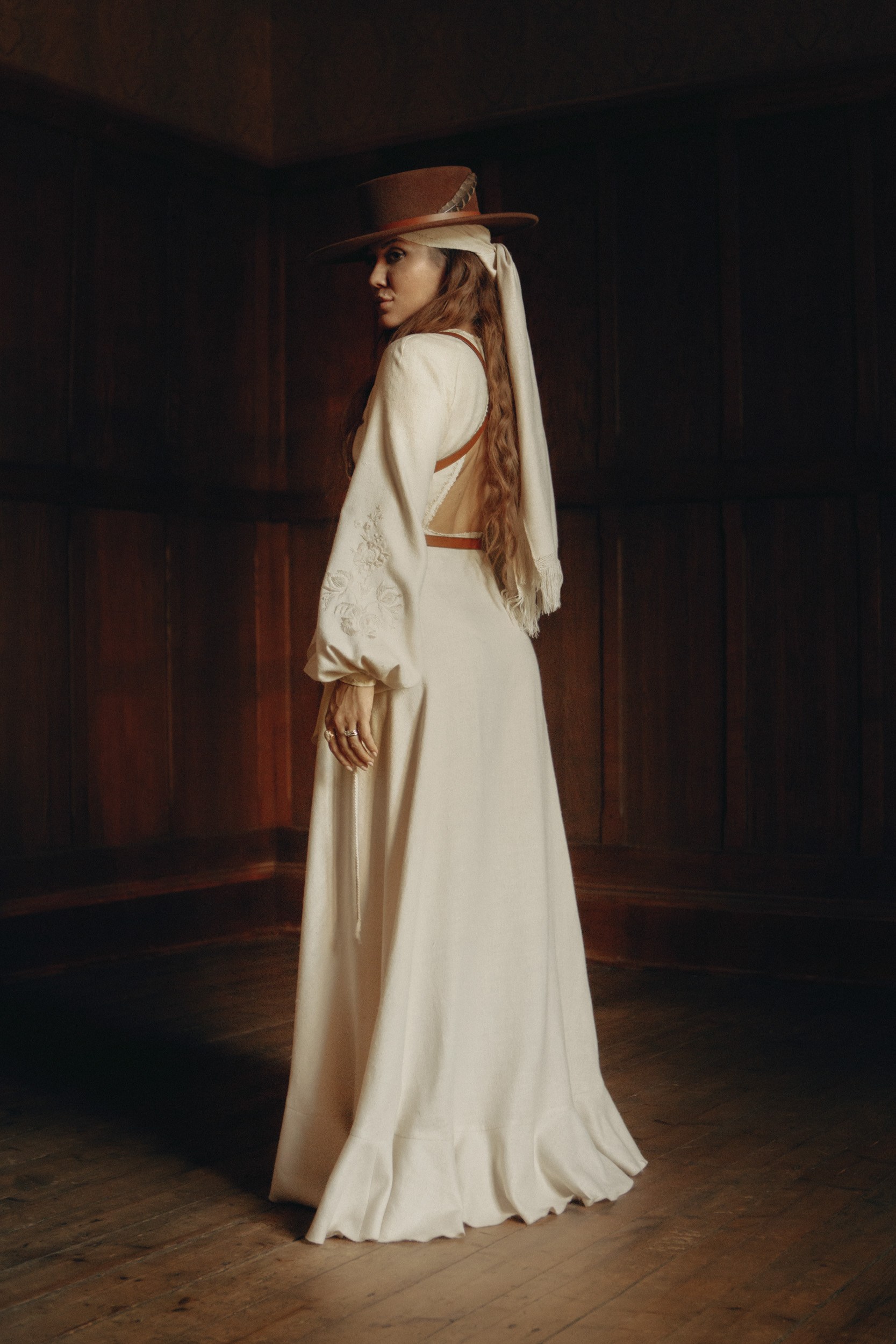 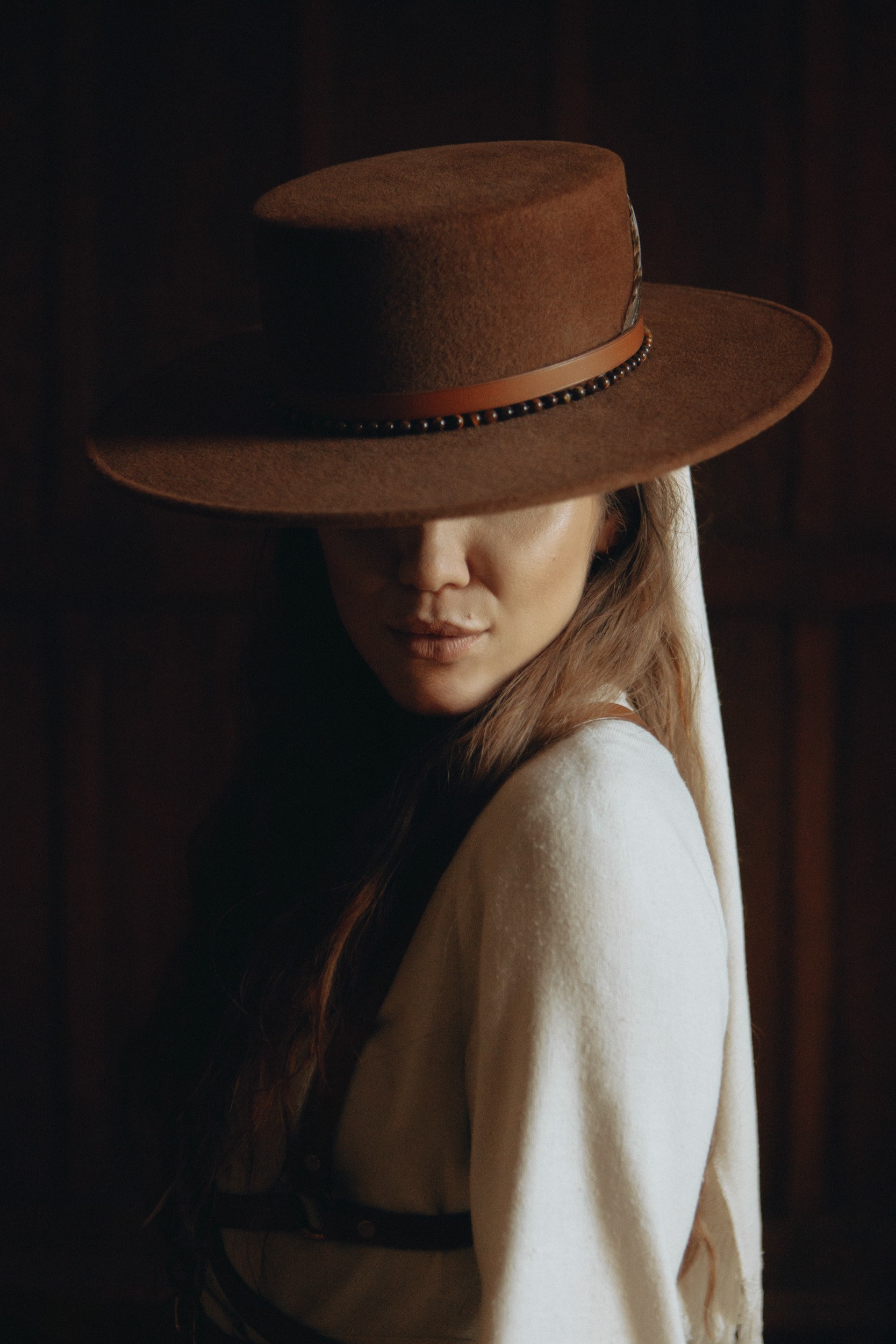 For the groom, we made two different 3-piece suits.

The suit for the first day had to be in the shades of red wine and crafted of fine wool as the wedding took place in Schloss Laitz in early fall. We decided to work with the most luxurious wool out there – woven by the House of Dormeuil who has been in business since 1842. Since then, the fabric house has been one of the great favorites of European royal gentlemen, Kings and presidents, and Hollywood stars such as Leonardo DiCaprio in the Great Gatsby. Today, the cloth mill produces in Yorkshire, England, and is also known for its devotion to sustainability.

The cherry on top – or should we say, a crown – was a gorgeous black top hat, a must in every gentleman’s wardrobe.
View gallery 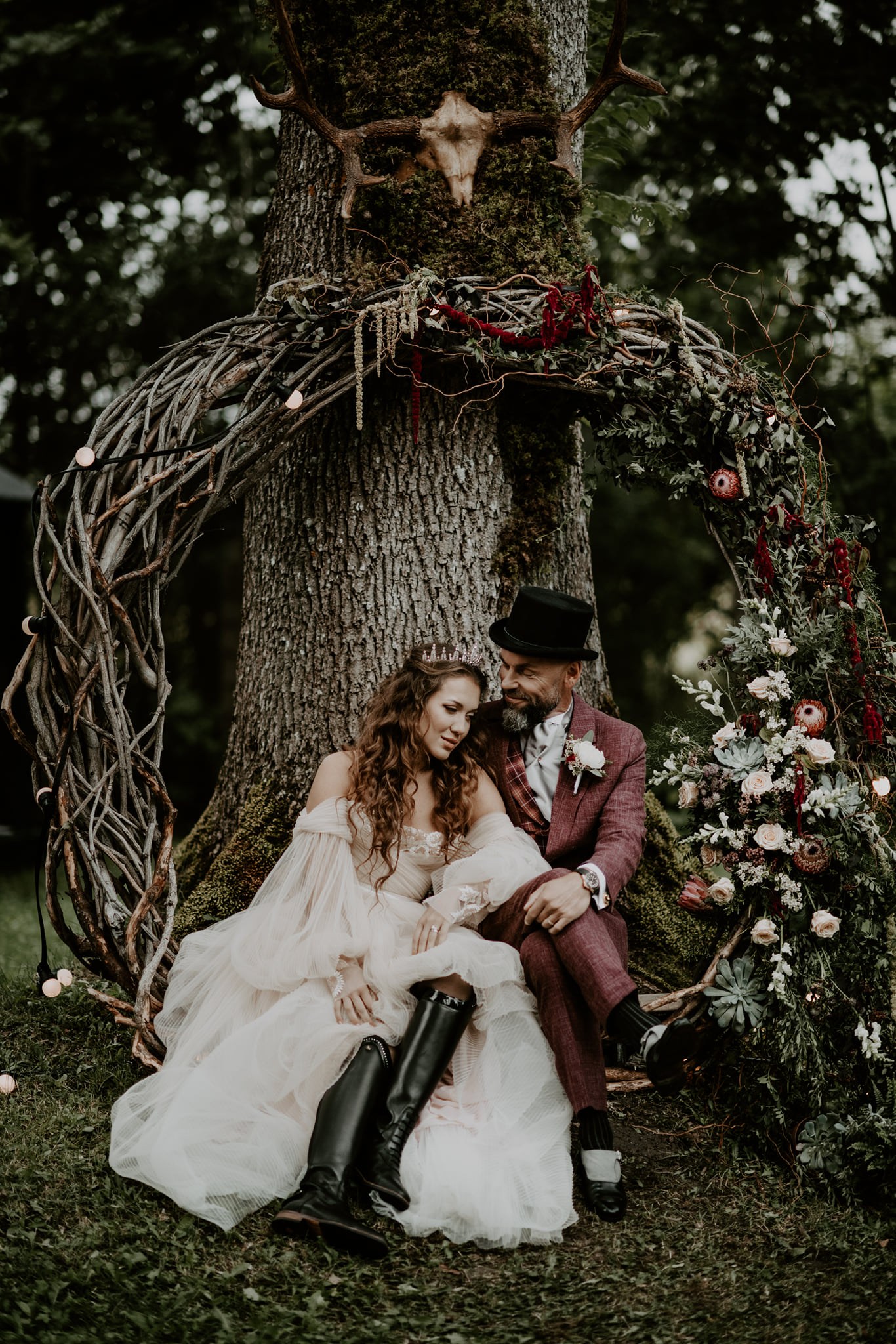 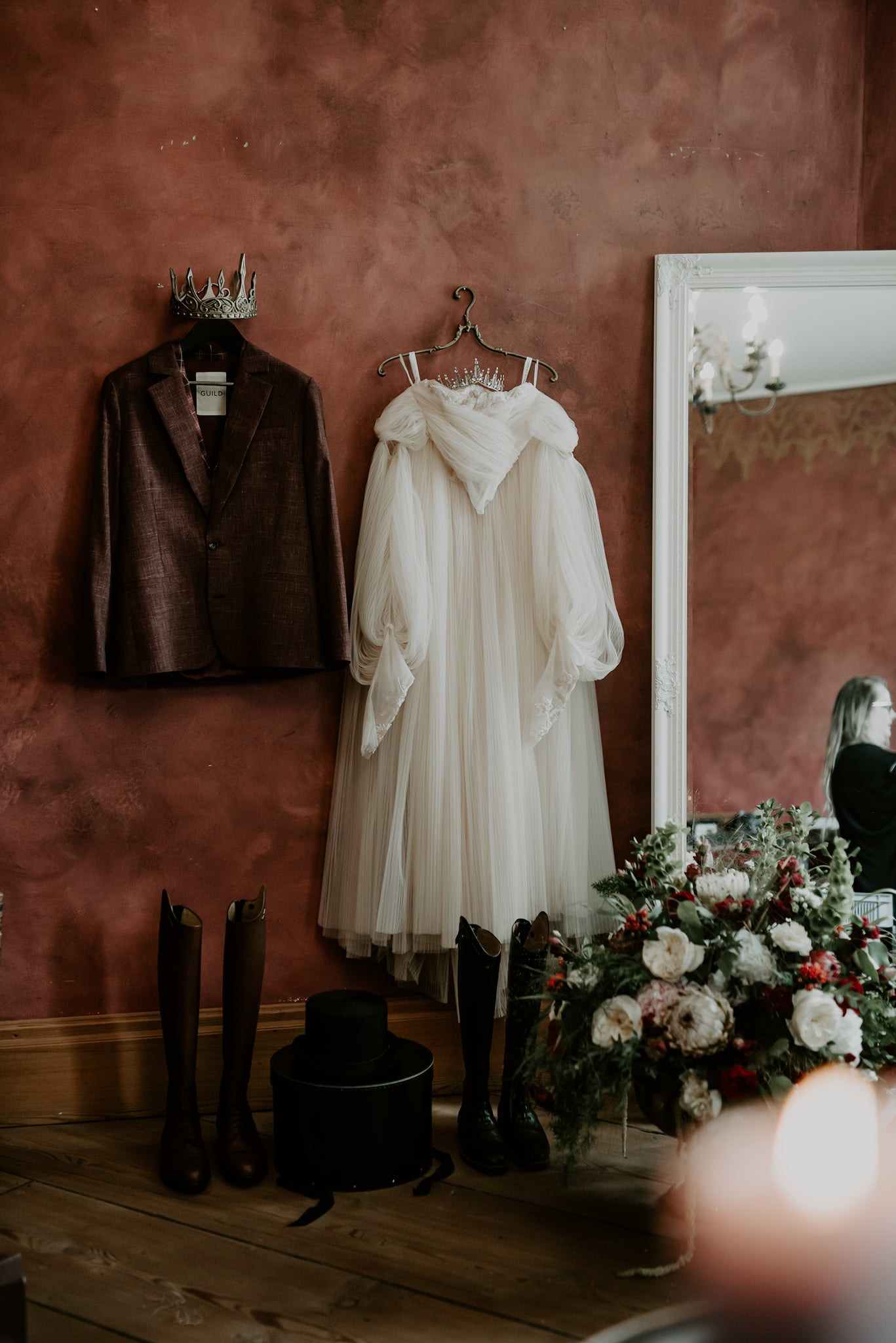 The suit for the second day had to match with the bride’s dress and to reflect the rustic yet noble country look. Crafted also of fine raw silk – The Queen of Fabrics – the 3-piece suit included high-waisted silk jodhpurs, a double-breasted sage green waistcoat, and a camel suit jacket. 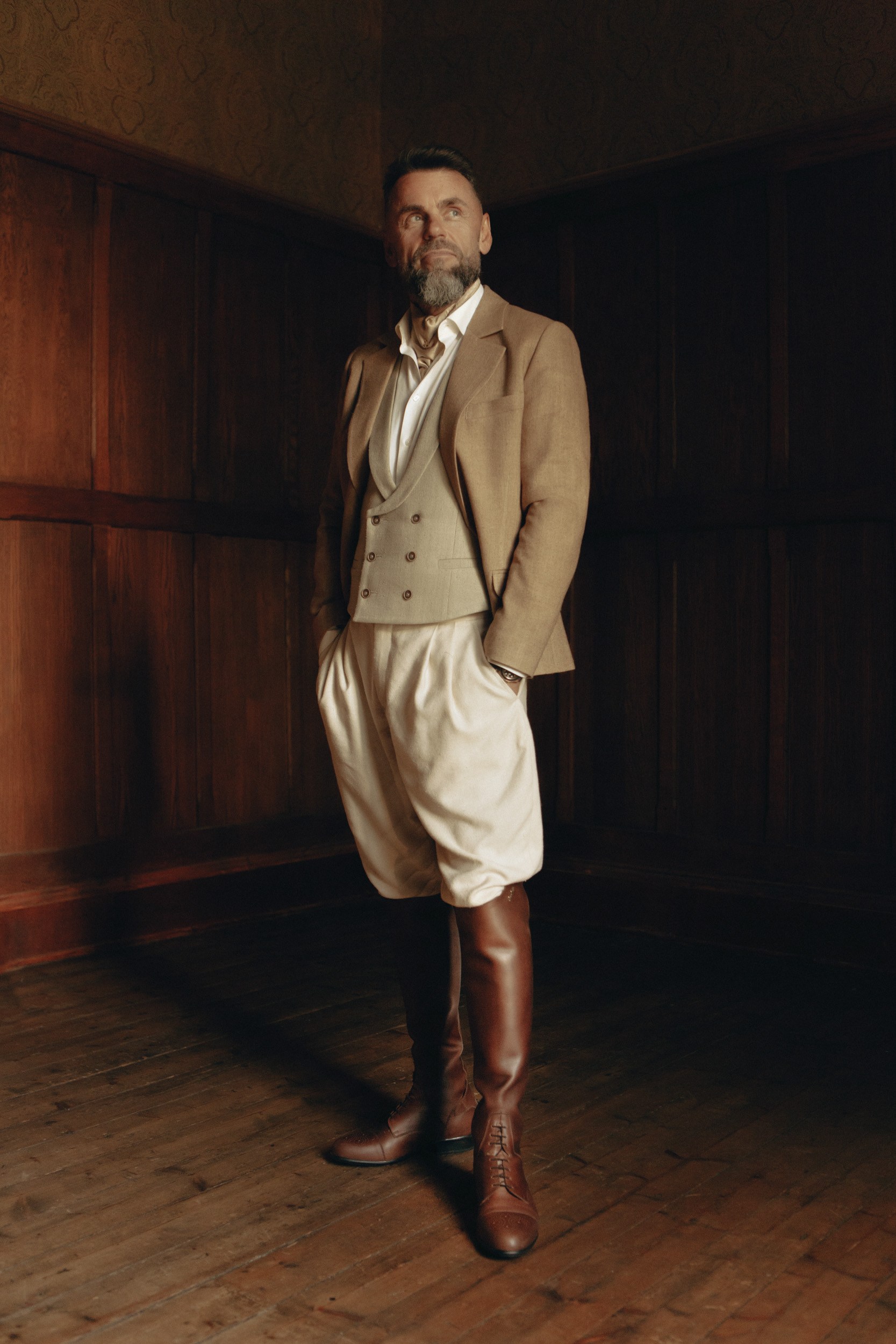 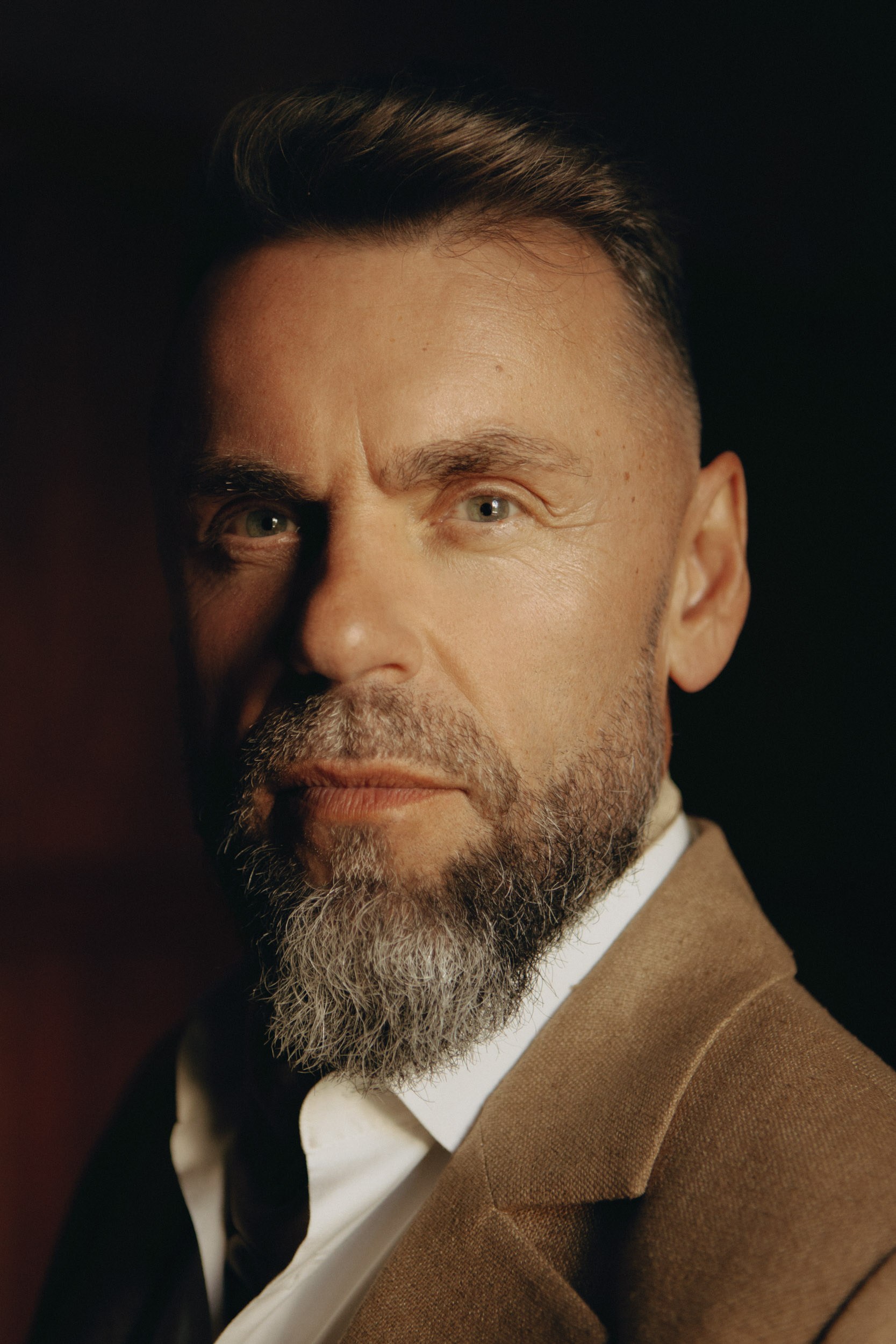 But more than an opportunity to make the most magnificent attire for someone’s most important day – we gained their friendship. Loving, free and fearless, we fell more and more in love with these two as we met on numerous fittings – that eventually lasted for hours as we were all under the awe of how similar we all are! This led to an incredible friendship that lasts to this day and to the most magical wedding we’ve ever had the honor to be part of. 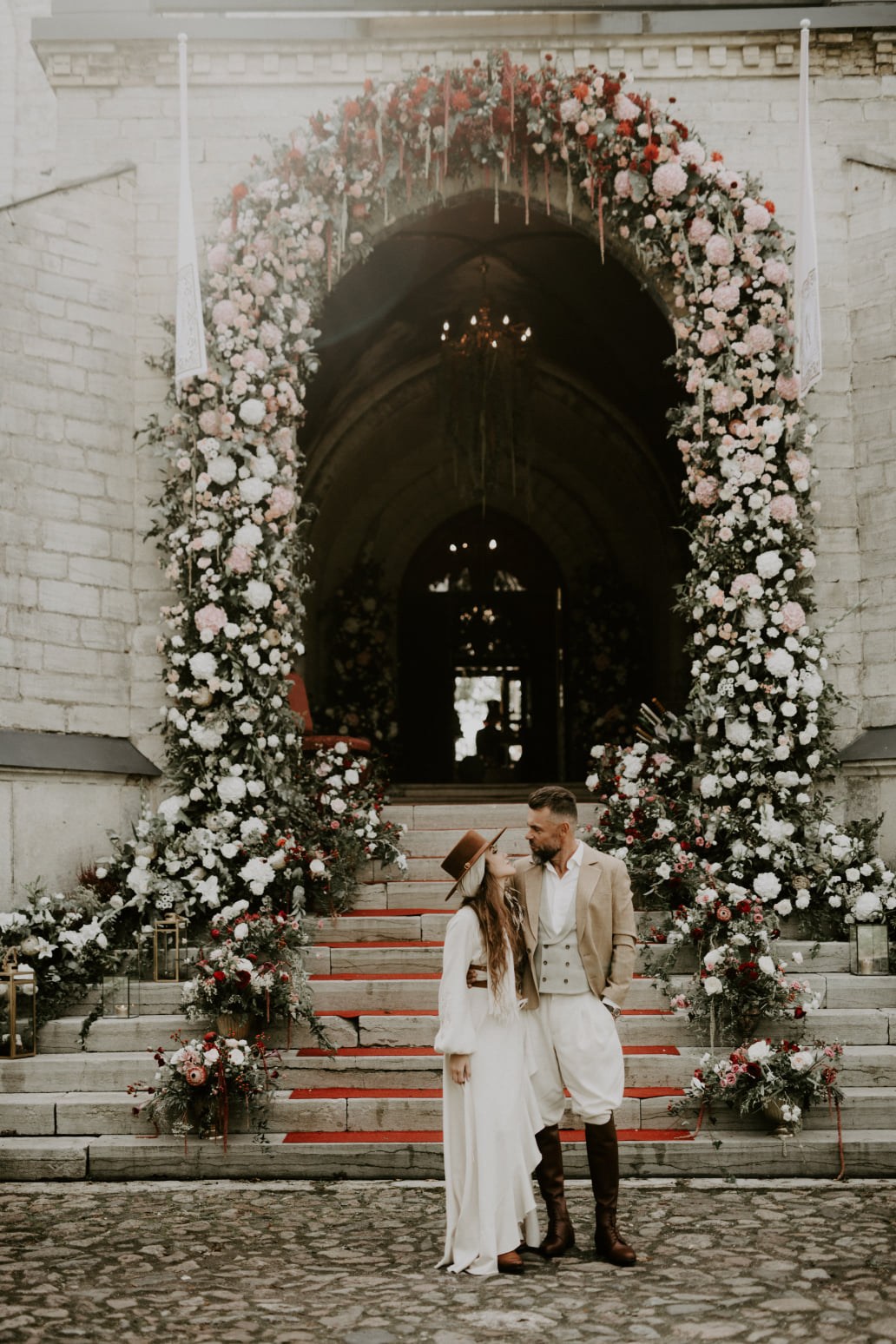 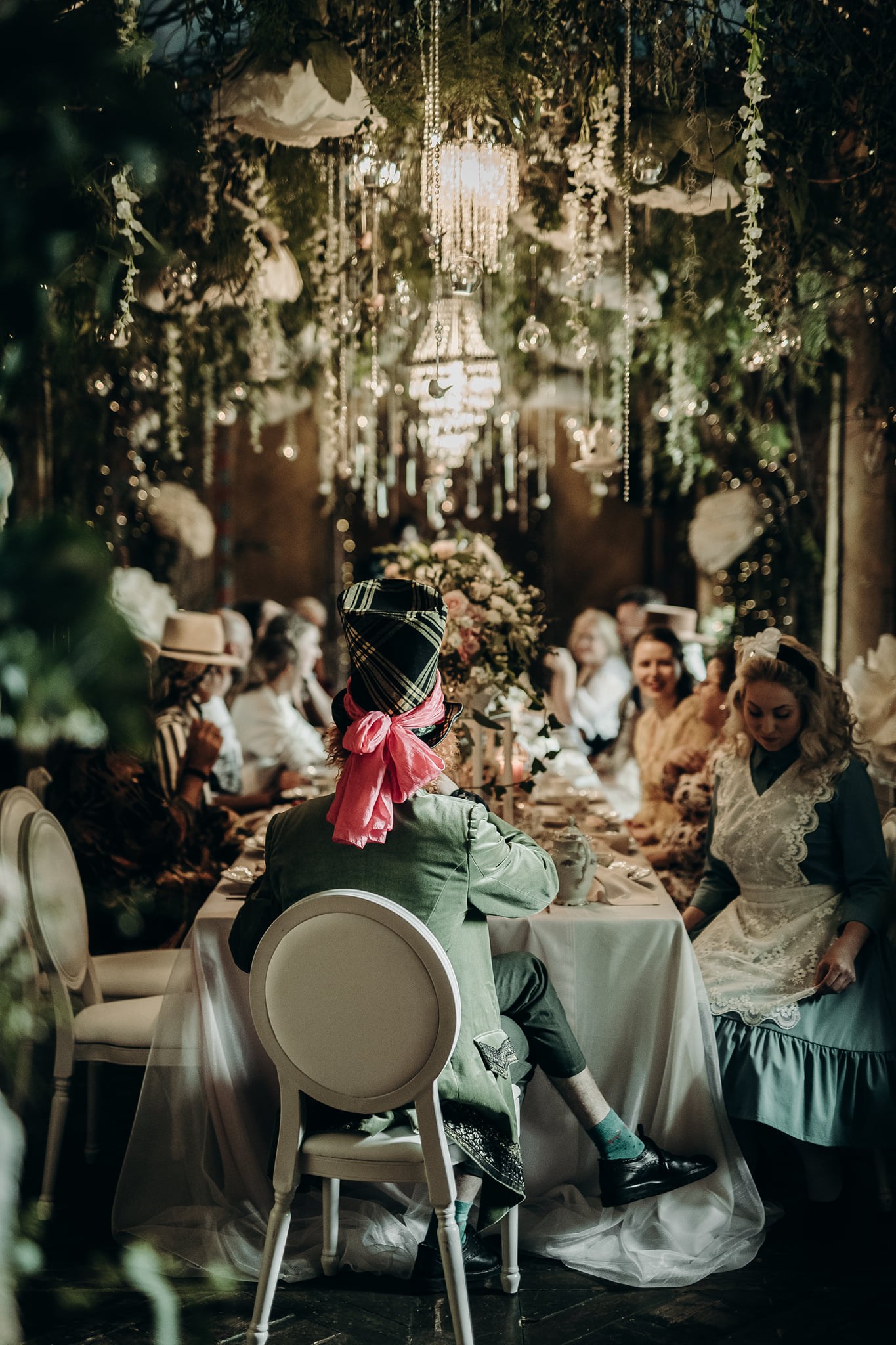 We also photographed them right after they left the wedding on a carriage – would you be willing to let go of the safety of the wheels and jump on the bare backs of white stallions, if asked? 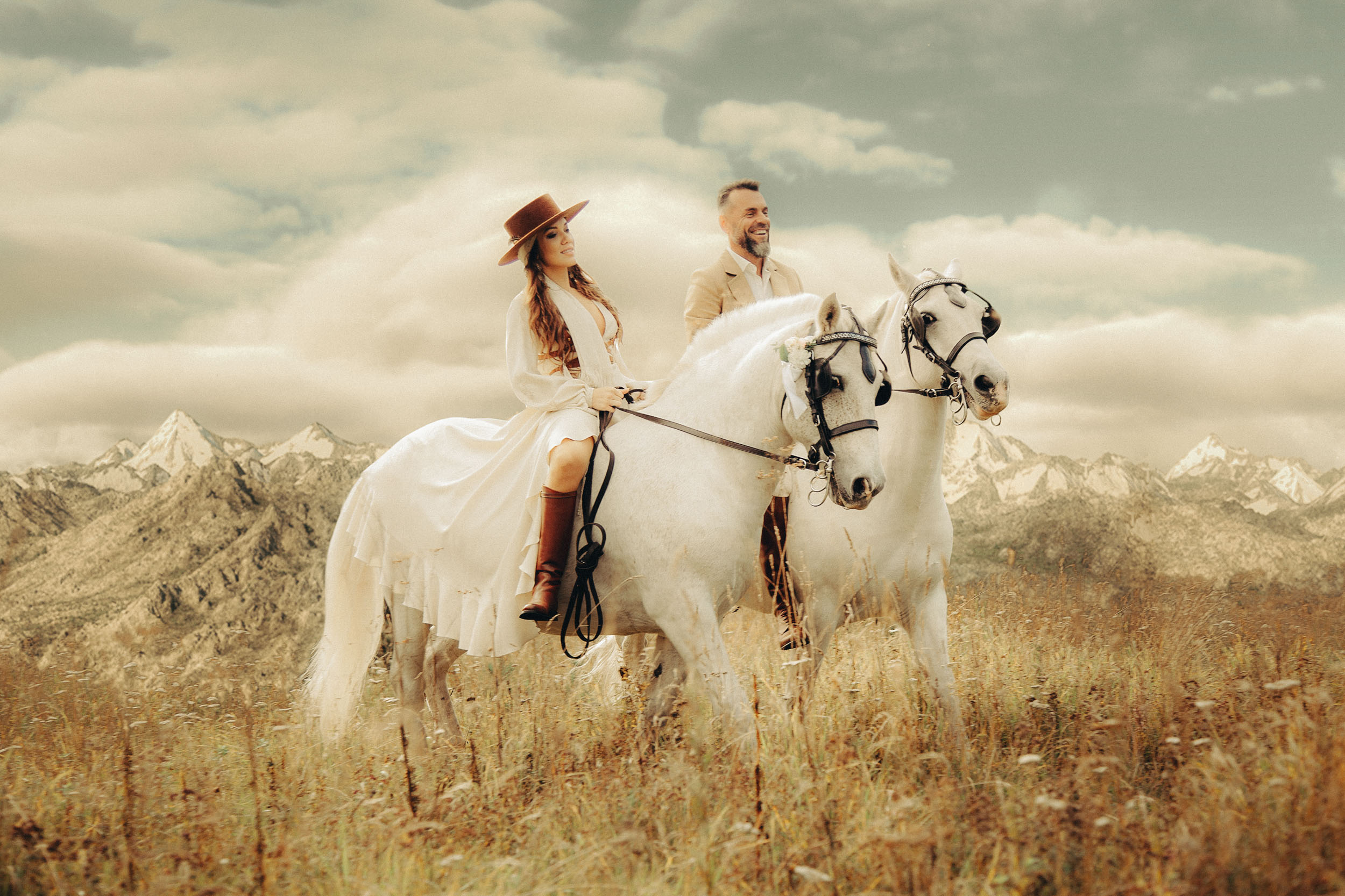